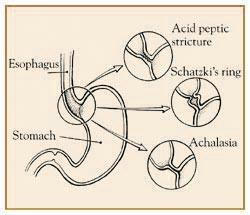 The esophagus is the long, narrow food pipe (gullet) that carries food and liquid from the mouth to the stomach. It can become blocked or injured in a variety of ways. Esophageal dilatation is the technique used to stretch or open the blocked portion of the esophagus.

There are several causes of blockage or stricture of the esophagus. They all can make swallowing food and/or fluids difficult. The physician's first job is to find the reason for the stricture or narrowing. The answer can usually be provided by the medical history, physical exam, xrays, and endoscopy (a visual exam of the esophagus using a flexible fiberoptic tube).

In most instances, the problem is a mechanical one with an obstruction acting like a dam across a stream. Therefore, the treatment must be mechanical. The dam must be broken. After a diagnosis is made, the physician determines the method of treatment that is in the patient's best interest. The physician has a variety of techniques available. Each has benefits and is appropriate in specific cases. The physician will always discuss these options with the patient. 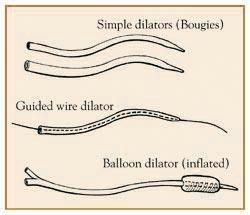 As mentioned, there are a number, of dilating techniques available to the physician. If endoscopy is performed at the same time, then it will be done in the endoscopy suite, usually under sedation. X-ray fluoroscopy equipment may be needed, so the procedure is also performed in the x-ray unit. Simple bougie dilatation may take only a few minutes. The other techniques require 20 to 30 minutes. Recovery is usually quick and the patient can soon begin eating and drinking to test the effectiveness of the treatment.

Esophageal dilatation is usually performed effectively and without problems. However, some complications can occur. A small amount of bleeding almost always happens at the treatment site. At times, it can be excessive, requiring evaluation and treatment. An uncommon but known complication is perforation of the esophagus. The wall of the esophagus is thin and, despite the best efforts of the physician, can tear. An operation may be required to correct this problem.

The alternative treatment options are to do nothing or to undergo major chest surgery. The latter is recommended only if dilatation is ineffective.

Narrowing or stricture of the esophagus is a very common problem. The physician can almost always uncover the specific cause of the stricture. There are a variety of treatment options available for the physician. Complications are rare and, in most instances, a satisfactory outcome occurs with complete clearing of or improvement in the swallowing problem.